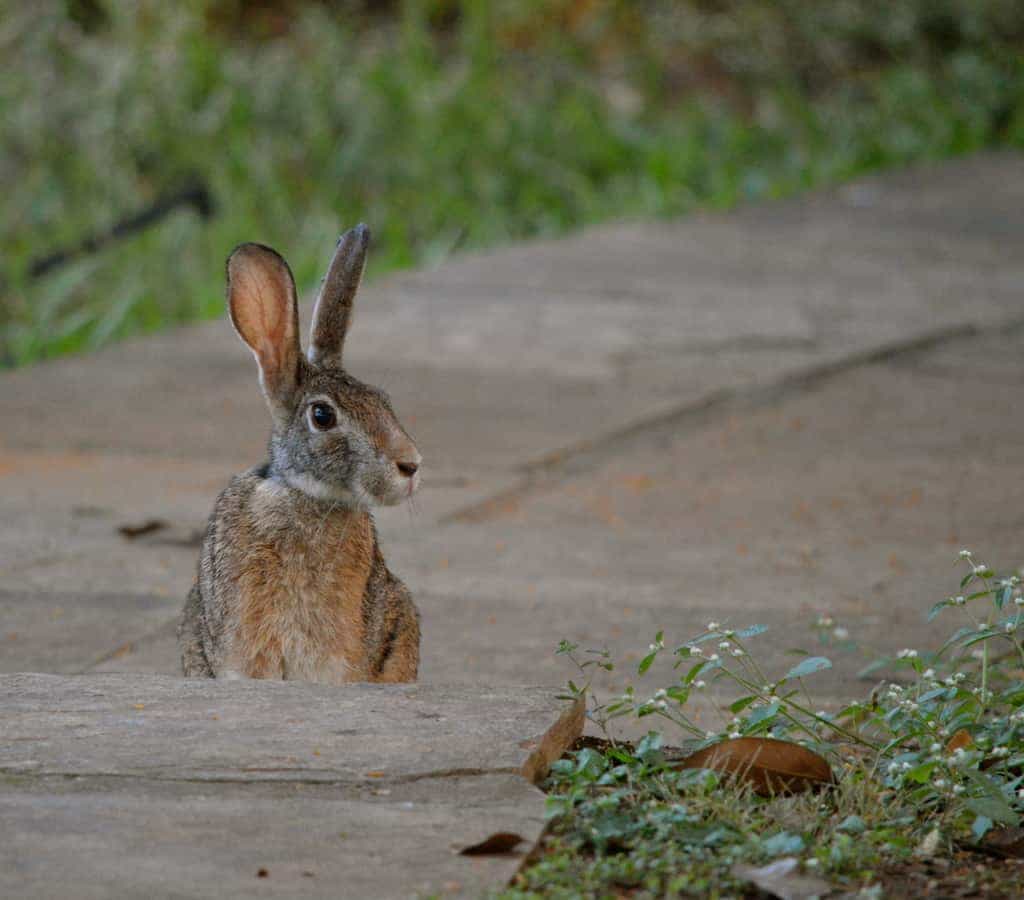 My fellow gardeners and I stand over the garden bed puzzled as to how all of our corn crops seem to have had the tops chopped, or perhaps eaten off. We leave the farm that evening convinced there is a corn snatcher on the loose. A few weeks earlier in the biodiversity reserve, a group of students labored with pickaxes and shovels to dig in search of a missing pipe essential for bringing water to seedlings. It was another mystery – how could the pipe start and end but be missing major components in the middle? So, to my surprise over the past few months instead of my original intention of learning how to be an agent of change, I have instead become an investigative agent working to crack the cases of missing crops and PVC pipe in pursuit of environmental justice.

The first case was easier to solve then I had anticipated because the answer quite literally jumped at me. I was sitting at the farm’s pagoda reading on a Sunday morning when I heard some bustling in the leaves. A jackrabbit with huge ears is propped up on his hind legs sniffing away with his nose in the air – it must have been the corn no less.  The rabbit proceeded towards the garden until he realised my presence and quickly bounced off out of sight. It is impossible to be angry with such an adorable culprit who has at least left our thriving tomato and potato plants alone!

The mystery of the missing pipe was quite a different story and it was a race against time. With the monsoon rains long in the past and with the penetrating sun shining day in and day out, the bio reserve has become like a desert with the hard sandy ground and cacti. Of course, this landscape is not hospitable to growing plants and one of our biggest dilemmas on the afforestation team has been trying to find a way to transport water to our trees. Having planted these trees in my first week at UWCMC, I feel a special sense of obligation to ensure their survival. So, with the knowledge of a water pipe “somewhere” in the ground but long forgotten, our small team spent multiple weeks journeying into the reserve to dig, and dig, and dig. Once we had a lead from a few findings of pipe segments, we followed the general direction in which the parts were heading.

Then one afternoon just when we were about to leave, we hit the final piece of missing pipe. One would think we had found a box of treasure. This small triumph is motivation to solve the long-term concern surrounding the development of a sustainable irrigation system for our young reserve.

Two mysteries down and I began to grapple with a new challenge – the IB math internal assessment. I was stuck without an idea on a topic for my statistical analysis when strangely enough I found inspiration in the Indian president. A huge portrait of Narendra Modi was on the front of the Times of India with the caption ‘Swachh Bharat Abhiyan.’ The goal of the campaign is to fulfill Gandhi’s vision of a clean India. In the valley surrounding the campus, a government operated waste management system is non-existent so the contaminants end up on the roads and in the river where the water is extracted for agricultural purposes and for drinking.  On our own campus, we struggle with upholding sustainable practices. If as a small community of socially-minded individuals we can’t manage our own waste properly, how can a nation do so?

I decided to take a closer look at the problem on campus and I decided to bridge my math assessment with the project. I began a month of collecting waste from the wadas  (residential quarters) on campus and auditing the contents. The waste diversion rates I discovered were dismal and the more I learned about the issue of solid waste management, the more complex the issue became. Then, in my research, I came across a successful case study of an organisation called SWaCH working in Pune (the closest city to UWCMC) to protect the rights of waste pickers. These waste pickers, 90% of them women, divert over 118 000 tons of material away from landfills in Pune every year. I wanted to learn more about this essential component of the green economy and about the individuals behind it so I inquired about a field trip. A week later a few students and I were shadowing Anita, a waste picker and SWaCH member, as she collected and sorted waste from over 500 residences in an apartment complex. After this process, she will sell the waste to dealers who purchase materials ranging from newspapers and milk bags to glass bottles and cans.

This system is working much more effectively than any municipal programs in Maharashtra but the contribution of these waste pickers is most often taken for granted as they deal with unfair compensation and hazardous conditions. The trip brought to light that human made issues not only have more obvious environmental impacts but these issues also cascade on to the more vulnerable members of society. Although now I am relieved to have a completed statistical analysis, the larger issue has sparked much bigger questions to consider.

The past few months in the sustainability stream have not been solely focused on environmental issues as one might expect. Issues related to the environment extend to all social issues and the multidisciplinary approach of the stream has made me much more aware of this interconnectedness. It is impossible to predict what mystery we will have to solve next but with the right balance of passion and curiosity, I know we can find all the answers we need.